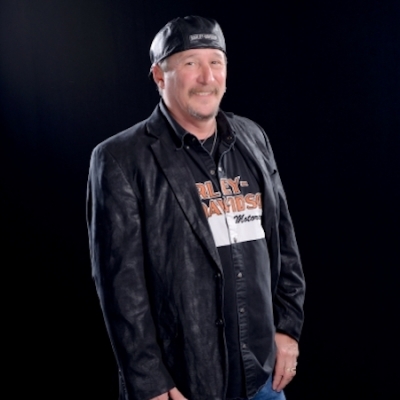 Russ Nagel is a biker, husband, father, grandfather, brother, and an all-around nice guy. While every comic out there has a “hook” that makes them unique, Russ’s hook merely is who and what he really is, an American Biker who just happens to be hilarious. Sit and watch the man on stage for 10 minutes, and you will barely have a chance to breathe from laughing so hard. Unlike some comics who poke fun at the world around them, Russ uses his own life experiences and perceptions to create his routines. No one else could pull off his comedy simply because there is only one America’s Funniest Biker.

Russ has had the pleasure of playing at places like the Atlantis Hotel and Casino on Paradise Island, The Majestic Theater in Dallas, and most recently "Down Under" in Australia and New Zealand. In addition to his other travel dates, Russ is a regular headlining act on Carnival and Princess Cruise Lines as well.

While many people have seen Russ on the Dry Bar comedy clips that float around Facebook, (Over 17,000,000 million views as of this writing), seeing him in person is so much better. You can learn more about Russ and find his upcoming tour schedule by scrolling further down this page or by following him on one of his many social media platforms by clicking on the icons above.