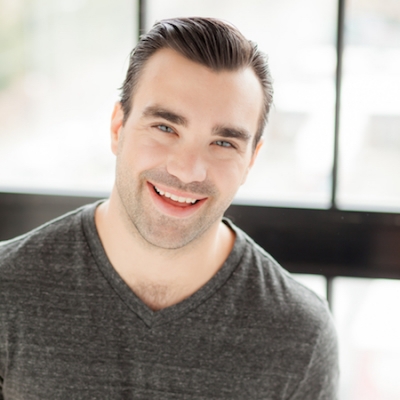 Joe Larson, the son of a working comedian, started comedy at an early age and has always had a knack for making light of any situation.  At 20, he began to seriously pursue stand-up, comedy, acting, and improv as a potential career when he was chosen “College Comedian of the Year” at the Las Vegas Comedy Festival. Then, the Seattle-born comedian decided he didn’t have enough traffic, smog, and pastrami in his life, so he moved to New York City. “I realized that my dream of being the first person on the cover of “O Magazine” other than Oprah wasn’t going to happen on its own.”

Working the comedy circuit on the East Coast, Larson found early success. He was nominated “Best Up-And-Coming Comedian” at the NYC MAC Awards, and was a finalist in both the prestigious Johnny Carson Great American Comedy Festivaland the well-respected Boston Comedy Festival. He’s in a serious relationship with his girlfriend … they're married. “She proposed to me,” he explains, “at a romantic candlelight dinner she looked me in the eye, and said, ‘Joe, I’m pregnant.’”

Parenting has given his comedy a whole new spin. His popular blog, I’m Not a Dad, I’m a Man with A Babyis read and enjoyed by many. His online comedy sketches with the group Grandma’s Favoriteare a YouTube favorite. If you haven’t see him killin’ it on stage, you might have heard Joe on the nationally syndicated, The Bob & Tom Show,or seen him on television on The Tonight Show’sLaugh Squad, Laughs on FOX, Gotham Comedy Live, and on the Speed Channel. He’s even had the time to fit in an appearance on the film, Stand-Up 360.

His newest album, “Emotional Support” was just released on the 800 Pound Gorilla label and is featured on Laughs USA on Sirius XM Satellite Radio.

Joe Larson has an irreverent, intelligent style that appeals to, well, everybody. He says it's because he just doesn’t care; the only things he cares about are his wife, his children, his hometown, his new town, his mother, his father, his audience and most importantly, making people laugh. From television and corporate work to cruises, colleges and comedy clubs, Joe has been funny everywhere; he will do his damnedest to continue entertaining the masses.