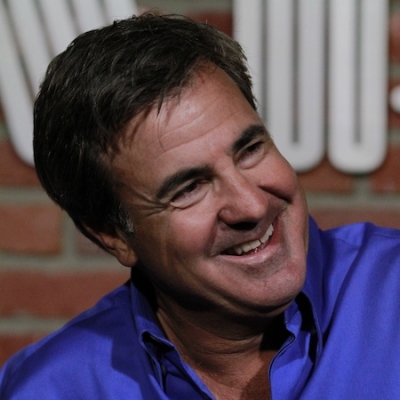 Jackie Flynn is an actor and comedian with prominent standup appearances, as well as extensive film credits to his name. Jackie has emerged as one of the funniest and most talked about comedians to come out of Boston, joining the ranks of Steven Wright, Denis Leary, Lenny Clarke and Jay Leno, and gracing the stages of the IMPROV, COMEDY STORE, FLAPPERS, LAUGH FACTORY, and other noteworthy venues. He has parlayed his success as a stand-up to firmly establish himself in the film and television arena, featuring in several episodes of the hit series “The King of Queens,” and recent guest appearances on “Veep” on HBO and the Disney Channel’s “Bizaardvark.” He is also recognized from his role along side the likes of Burt Reynolds, NFL Coach Jimmy Johnson and Jerome Bettis as one of the "Men Of The Square Table" in the hugely popular Miller Lite "Man Law" commercials. Jackie is currently seen in the series regular role of “Tony” in “Loudermilk” (3 seasons on Amazon Prime), which is Peter Farrelly’s directing foray into television.

He is also one of the proud winners of the prestigious San Francisco Comedy Competition, as well as a featured performer at the Montreal Just For Laughs Festival gala. He was chosen to perform at the U.S. Comedy Arts Festival in Aspen, Colorado produced by HBO.

Early on in his career, Jackie was discovered on stage in Boston by the Farrelly brothers, who have since cast him in back to back roles in “King Pin”, “There’s Something About Mary”, “Me, Myself And Irene” “Shallow Hal” and “Stuck On You.”  Recently, Jackie has had prominent roles in “The Three Stooges,” playing opposite Kevin James in “Here Comes The Boom,” and 2017's film “Special Unit.”

Jackie is truly a "comic's comic" whose refreshingly unique brand of sarcastic observational humor puts him in a class all his own, apart from the many derivative cookie cutter comics plying the airways today. Audiences young and old appreciate his wit and rapid-fire "take no prisoners" delivery.