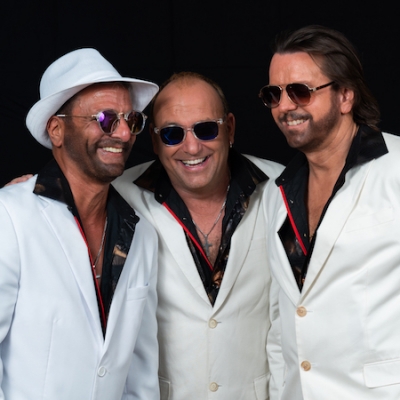 Close your eyes & you will swear the real Gibb Brothers were performing! Open your eyes & experience the illusion that they’re standing in front of you! Experience an incredible technical, theatrical production before you that touches your senses & effects your emotions.  BEE GEES NOW! An unforgettable night of incredible entertainment awaits you.

Who are the Bee Gees Now?

Originally from Fulham Broadway in London, UK. Dave has been entertaining, playing bass & singing since the age of 13. But his professional career started with roles in live theatre, Dave is an award-winning Las Vegas Tom Jones impersonator. In addition, Dave performs tributes to Bobby Darin, Elton, Roy Orbison & Sting.

Along with Dave Radford he is a founding member of the Beegees Now.

Aaron is a world class musician and performer. He has been wowing audiences as an energetic singer, actor, and multi-instrumentalist performing on violin, mandolin, guitar, bass, drums, percussion, and banjo.

He’s been a working musician since high school, playing almost every style of music and has worked behind such stars as Buju Banton, Third World & The Zap band.

Originally  from Memphis, TN. Dave has that “groove thing going on”! He has played behind some of the most iconic names in music: Stevie Wonder, Spencer David, Jimmy Buffet, Jeff Walker, Danny & The Juniors.